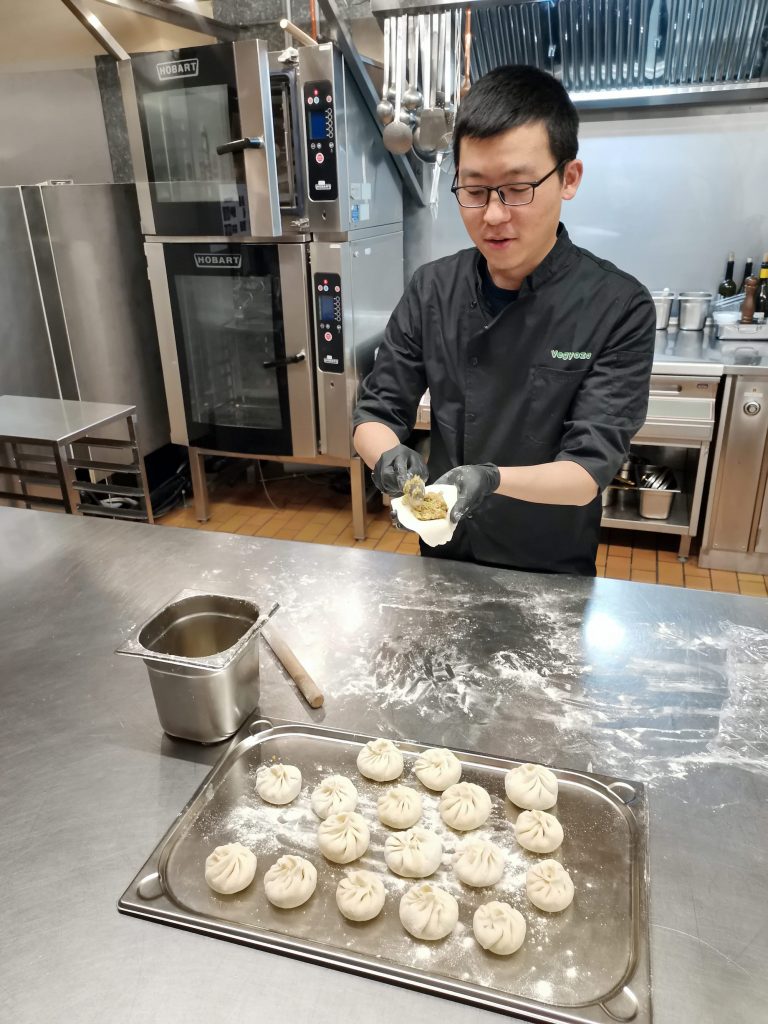 I originally come from Taiwan, which has a rich culinary heritage of its own, as well as being influenced by recipes from China, Hong Kong, Japan, and Korea.

Five years ago, I moved to Zurich, and since then, I’ve been searching for examples of how Eastern and Western recipes have been integrated over time or how both cultures have developed similar foods. For instance, dumplings with a savory filling. In Italian cuisine, these are known as Ravioli. However, the same recipe exists in Tibet and is called Momo. The Hong Kong version of this recipe is Dim Sum, and it goes by the name Gyoza in Japan.

Having traveled extensively and sampled a considerable amount of recipes from different countries, I decided the time was right to establish my own dumpling flavors. My vision was to develop a version using local, healthy ingredients that friends and family can share and enjoy together.

My first creation was some vegan dumplings which I named Veggie Symphony. I got inspiration for this from my interest in orchestral music. An orchestra is a collection of musicians playing different instruments guided by a conductor who controls the music’s pace, timing, and rhythm. I viewed my challenge of experimenting with many plant-based ingredients to find the right flavors similar to the challenges faced by an orchestral conductor.

Although, unlike an orchestra that can be made up of dozens of musicians, my Veggie Symphony contained a mere seven vegetables. However, it did provide a perfect balance of fiber and daily nutritional requirements.

One dish that I am particularly proud of is my version of a traditional Korean called Kimchi which I refer to as ‘vegan Kimchi.’ The original dish that I base mine on is recognized in the UNESCO-Intangible Heritage lists, although not my vegan option! Traditional Kimchi is not plant-based, so I thought it would be exciting to create a vegan version of this classic dish. I also included apple as one of the ingredients to help ferment the cabbage without using preservatives. Even though I say so myself, it tastes pretty spectacular and is even more crunchy than the original.

I create all of my dishes with the mindset of them being healthy, natural, and convenient. When my dumplings are made, I quick-freeze them, ensuring they will maintain their freshness for three months. They take just seven minutes to prepare from frozen so that you could be tucking into some delicious, fresh, and healthy dumplings in under ten minutes. There’s not much more convenient than that!

I made my vegan Kimchi with time-saving in mind, and you can eat it with various other things. It is great on a piece of bread or over a salad. It makes a delicious accompaniment for rice, noodles, or pasta for something a bit more substantial. You could even eat it with dumplings also.

By fermenting my Kimchi, it can remain fresh for three months despite having no preservatives added. Another one of its benefits is for your health, as it contains probiotics and healthy bacteria to aid your digestive system and help lower cholesterol.

Try some of these delicious, healthy, and convenient foods today, and see how satisfied they make you.